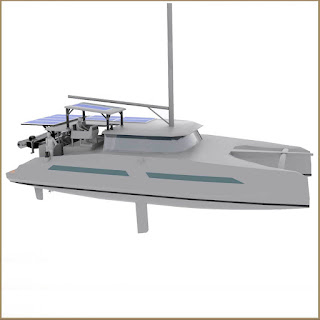 We are building S/V Lynx from a Schionning Designs kit.  Now, having made the decision to build our catamaran vs. buying new or used, that means we have a whole lot of decisions to make on what goes into the shell of the boat.  Foremost in those decisions is which type of propulsion system.  We considered four different setups which I will now go over, briefly.

#1: The most obvious and common choice is a pair of 55hp diesel engines on shaft drives.  These have a lot of advantages, but the biggest one is price.  These will cost something like $30,000, or more, less than the other three choices.  That is a lot of money!  Diesels also have the advantage of using a very energy dense fuel, diesel.  This means, pound for pound, diesel has more potential energy than what you can put into a battery (which the other three systems all use).  Now for the downsides. 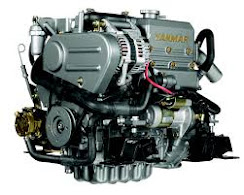 They require a lot of maintenance since they have a complex system of moving parts.  They stink and make a racket while running.  They do not do well at an idle, so you either have to go somewhere to charge your batteries, or add a generator, which is a third diesel engine, requiring even more maintenance.  They also burn a lot of fuel, since any time you are motoring, you are burning diesel.  They also require warming up, so you cannot get instant power if they were not already running.  Finally, they require a certain amount of RPMs to function, so maneuvering in a marina or any small area is more difficult.

#2: A Hybrid Diesel / Electric system.  This consists of two electric motors (sail drives most likely) and two diesel generators.  Now, you could go with only one generator, but then you would be sorely underpowered for any lengthy motoring situation where you need all their thrust.  Let's start with the good stuff.  Anytime you are doing short passages, it is unlikely you will even need those generators, so you can make such a passage on zero diesel fuel.  The electric motors need no time to warm up, so they 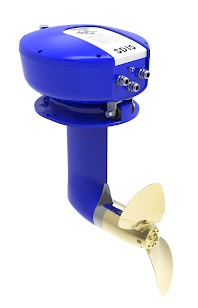 are ready in an instant.  They will give you full torque at any RPM, so maneuvering in tight locations is easy.  While sailing, the props can be put into regeneration mode, which means the water moving past the props turn them backwards, which turns the electric motors backwards, which sends power to your batteries.  With solar on top of the boat, you have two ways of recharging your batteries without using those generators.  While running, they have no smell and are nearly noiseless.  Now, for the negatives.  There are two big ones, the high price to install the system (which includes Oceanvolt SD 15 servoprops) and the woefully reduced horsepower.  These are 15 kw electric motors, which equate to 20 hp.  That means, full out, they only give you 40 hp together... and electric motors should not run at full power for long periods, so for that, you may only have around 32 hp!  For a big cat, which normally requires about 100 hp, that is only 1/3 of the needed thrust!  Finally, the range is very limited on batteries, no more than about 3 hours at typical cruising speed.  That means, on a longer passage, you must turn on the generators.  These are less efficient than diesels due to the number of conversations of energy.  Each conversion takes energy away.  Therefore, while running on diesel fuel, you are burning more diesel per mile than a straight diesel boat.  This kills the efficiency on long passages and makes you carry a full load of diesel fuel.

#3: Parallel Diesel / Electric system.  Here, you have two 45 hp diesel engines with an electric motor attached between the diesel and the shaft drive that leads to the prop.  The system can run on just the diesel or switch to the electric motor.  Now you have the option to be a diesel boat, with all those advantages, or an electric boat, with all those advantages.  But there is more!  If you add a clutch to the 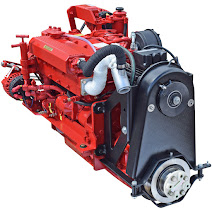 shaft, you may disconnect the diesel and electric motor from turning the prop and that lets the diesel engine turn the electric motor, becoming a generator.  Now you have two generators on board, without the added cost, weight, and maintenance of separate diesel generators.  Now let's talk about the negatives, price and weight.  This system is more expensive than the Diesel, though less than the Hybrid.  It weighs less than the Diesel boat simply because it does not need a separate generator, but weighs more than the Hybrid (because, at times, the Hybrid has to carry more fuel on board).  Still, all said and done, this was our top contender for the propulsion system for S/V Lynx... until we looked at the final option.

#4 Combo Parallel Engine and 20 kw Electric motor.  In this configuration, we have a parallel engine in one hull (see above) and an electric motor in the other hull.  Both use shaft drives. Because there is only one diesel, we increase the size of the engine to get 110 hp.  That makes it equal to the diesel boat and more than the parallel boat.  In the other hull, we put a single 20 kw electric motor that produces up to 28 hp, full out, or 22 hp for long periods.  if you add that to the diesel, your total horsepower is 138, more than any of the other options!  Better yet, you are getting rid of one diesel engine, meaning you 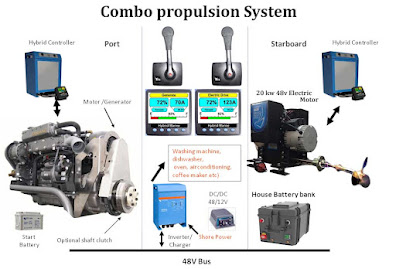 only have one diesel on the boat to service and maintain.  That also gets rid of a lot of weight!  This system is anywhere from  147 to 568 pounds less than the other three options!  Both electric motors can regenerator power.  The Parallel engine can act as a 10 kw generator.  Then there is the price, this Combo system is less expensive to add than either the Hybrid or Parallel.  As for the Diesel, over time on our double circumnavigation of planet Earth, the Combo system will save on fuel and maintenance to nearly match the Diesel boat price.  The Combo system also has greater range, weighs less, has more horsepower, has redundant propulsion systems (diesel or electric), requires less maintenance, and saves more fuel.  Sweet!

In the end, we will burn 2,600 gallons less fuel, smell and hear a diesel engine running 6,000 hours less, do shorter passages without burning a single gallon of fuel, have extended range on long passages, including endless electric power from solar and regeneration.  And all that, while shedding well over 500 pounds of weight compared to a Diesel boat!

That is why we are going with a Combo propulsion system on S/V Lynx.  Right now, we are considering which parallel engine and which electric motor to purchase, though we have some front runners.  We want both to have 20 kw electric motors that run at 48v.  That limits our choices as many  20 kw motors run at a higher voltages.  However, there are some choices available, we just have to decide on which one!

If you would like to see a more detailed comparison of these systems, including a bunch of example passages comparing fuel usage, follow this link to the pertinent page on the S/V Lynx website

Or, just go to www.SVLynx.com later.

Posted by Captain Blood at 9:05 AM